A Hi-story by names

For decades I did not use my given name ‘Tim’ in private life. I always used it in conventional business life and official contexts, but was not happy with it in private. Every name has a meaning, and Timothy comes from the ancient Greek ‘Timor Theus’, meaning – so I thought – ‘Fear of God’. My parents gave me that biblical name from the context of their Christian beliefs and world view, but I shared neither that religion nor that world view with them. Put simply, I felt that that name had nothing to do with who I was.

For me, a name matches a particular phase of life, in which a certain theme, topic or quality is in focus and wants to be healed, experienced, embraced, let go of… The energy and meaning of an appropriate name support the growth of the corresponding insight or quality in its bearer, who is addressed so often by that name. The name is both a goal, and a support to reach it. Thus it came that I had quite a few names in my life, here in chronological order: 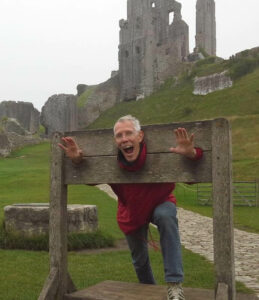 Tim had been a bit naughty

Shunyata is the name I chose for myself in 2006. Before we get into the (remarkably non-trivial) meaning of the word, a brief note on how I chose it:

I had had a sudden and very clear noticing that the name ‘E.T.’ had run its course, that that phase of my life was completed. (That was fun – for a few weeks I had no name, so nobody knew what to call me). I spent those weeks researching Sanskrit names, meditating over them, feeling into them – and arrived at a short list of candidate names. These I wrote in large letters on sheets of A4 paper, one name per sheet, and sat on a meditation cushion under which my girlfriend of that time (from behind me) inserted one sheet after another. So I did not know which name I was currently sitting on, and was simply feeling the quality of each name. The repeated clarity for a particular sheet of paper was very clear – it bore the name ‘Shunyata’

Regarding ‘Shunyata’, Karmapa has pointed out that it is due to existence that there is emptiness, and not to non-existence. This is what I wrote to my friends at the time I adopted the name:

Shunyata is Sanskrit and is normally translated as ‘Empty’ or ‘Emptiness’, sometimes also as ‘Openness’ or even ‘Relativity’. Shunyata is a core concept of Mahayana Buddhism, and cannot be ‘simply’ translated into a western language without the loss of a whole ideological construct. Shunyata means neither Nihilism (nothing really exists) nor anything absolute (which would underlie all manifest forms). Rather, Shunyata implies that things (manifest forms) are empty in the sense that they do not persist independently.

I find the meaning of the word ‘Shunyata’ (or ‘Sunyata’), as taught by Tibetan Buddhists, heavy going. In its basic meaning it refers to the non-separation, or interdependence, or relativity, of all phenomena. But in its final meaning, by general consensus of writings on it, it refers to the state of (what I call) Nothingness, which a sentient being arrives at as (or near) the pinnacle of all possible spiritual achievement – having become a Sage, an embodiment of ‘Shunyata’.

Much has been written about ‘Shunyata’, some of it by Sages and Liberated beings, although some texts from people of great learning are, while their authors may not have attained these states, more easy to digest. I will not attempt to add any more to the wonderful texts already available. Here are some links to good articles on the Internet: